Do You Need a Prenup? When you’re planning a wedding, the end of the marriage is probably the last thing on your mind. However, there’s still a significant chance that you will go through a divorce, especially if you’ve already been married before. Meanwhile, money issues are always a major cause of contention in struggling relationships. Enter the prenup, short for prenuptial agreement.

Prenuptial agreements have a bad reputation as a sign that you don’t trust your partner. Some may say it means you already have “one foot out the door.” When used correctly, they can actually be a valuable tool in protecting both you and your fiancé if the future doesn’t go according to plan.

Who Needs a Prenuptial Agreement?

First, who doesn’t need a prenup? If you’re relatively young, getting married for the first time, and neither of you is heir to a vast fortune, you probably don’t need one. If you do end up getting divorced, separating your assets will probably be a standard undertaking with no unpleasant surprises.

However, that leaves a lot of categories of people who should consider a prenup before they tie the knot. For example, if you’re older when you get married, you probably have more assets. Do you already own a home? Do you have a business? Significant investments? If so, consulting with a lawyer can help you figure out how to handle those premarital assets in the best way possible.

The classic prenup scenario is when one party has inherited or is going to inherit a lot of money. In some states, an inheritance is considered individual property even if you receive it while you’re married. However, this varies from place to place. A lawyer experienced in the state where you live will know the exact details.

Prenups don’t just protect you in the event of a divorce. They can also help clarify division of assets if one party dies unexpectedly. Nobody wants to lose a spouse and have to untangle a financial mess at the same time.

If one or both of you have children from a previous relationship, it’s especially important to get your financial affairs in order before you marry. We’ve all heard of cases where a celebrity dies and their spouse and children fight over the inheritance for years. Even if you know your fiancé and children would never be that petty, it’s far better to make expectations clear up front rather than making your family sort it out when emotions are running high.

In addition to considering a prenup, make sure you update your wills and any life insurance policies you have.

Getting the Most Out of Your Prenup

In the movies, a prenup is usually portrayed as something that the richer party simply presents to their fiancé with the choice to sign or not sign. Moreover, it’s a common misconception that prenups only protect the richer person in the event the marriage ends. However, a good prenup should be something that you negotiate in order to come to a mutually acceptable agreement.

You should always consult your own lawyer before signing a prenuptial agreement, regardless of whether you’re the wealthier or the poorer party in your relationship. A lawyer well-versed in the topic can explain what your legal protections are. For example, someone with a lot of money might try to tell their spouse that they can’t leave because they’d end up out on the street without a penny to their name. However, in most jurisdictions this isn’t the case. A prenup that goes against the law is generally unenforceable, but if you don’t know that you might think you’re stuck in an unhealthy relationship.

A prenuptial agreement can also protect the less wealthy party by allowing you to make provisions that go above and beyond the minimum required by divorce law. Insisting on a fair division of assets in the event of a divorce doesn’t mean you aren’t committed to the relationship. If anything, it proves your commitment since being forced to stay due to financial dependence will be off the table.

Build a Strong Future Together

Whether you’re engaged, married, or a divorcé, it’s never a bad time to get better at money. Mastering your money as a team can make a couple stronger. A good financial advisor can sit down with both of you and help you synchronize your goals. To tap into this marriage enhancer, contact us today to match with an advisor hand-picked to meet your needs.

PrevPrevious PostWhat Is a Fiduciary?
Next PostWebinar Recording: Investing in Syndicated Multifamily Properties for PilotsNext 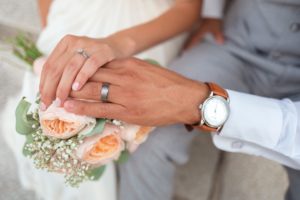 When you’re in love, talking about money may seem mundane. 40% of When some people imagine having a child, they feel only excitement. Others What Does the 2021 Child Tax Credit Mean for You?

Every year, millions of families benefit from the child tax credit. This year, the American Rescue Plan has expanded that credit.

How Parents Can Return to the Workforce

Returning to the workforce can seem especially intimidating for parents under current circumstances, but there are still plenty of options.